Promo products branded with powerful messages can serve as a tangible force for good during difficult times.

The tired slag ignores the cost-effective, ROI-rich impact that promo products can have when the solutions are tailored intelligently to a client’s audience. Read more about that here. As importantly, the long-running insult also ignores the fact that the products can serve as the foundation for powerful messages that do everything from contribute to collective catharsis when tragedy strikes, to help raise money to support important causes during difficult times.

Two examples from recent weeks illustrate the latter points. The first centers on the tragic story of Carley Ann McCord. She was a popular sports reporter in Louisiana. On Dec. 28, the 30-year-old died in a plane crash en route to see the Louisiana State University Tigers football team play in the college football semifinal. Her father-in-law, Steve Ensminger, is LSU’s offensive coordinator.

On Jan. 12, the day before LSU was to play in college football’s national championship game, the LSU fans group Cajun Tiger Tailgating held a crawfish boil at which they gave out bracelets branded with the message, “Do it for Carley” – an inspirational rallying cry calling on the team to win the big game for McCord and her grieving family.

The group was also providing McCord-inspired T-shirts, which were screen-printed with a quote the late reporter posted on social media before she passed away. The quote is: “Only rainbows after rain. The sun will always come again.” Beyond the quote, the shirts featured an LSU logo and McCord’s name and the years her life spanned.

Additionally, Cajun Tiger Tailgating told news outlets that it plans to sell merchandise as part of the tribute to McCord. A portion of the money will benefit a memorial scholarship established in McCord’s honor at one of her alma maters – Northwestern State University. Funds from the scholarship will support female students at the school who are pursuing a career in sports journalism.

In another example from the sports world, 23-year-old professional hockey player Oskar Lindblom was diagnosed in December with Ewing’s sarcoma. Following the cancer diagnosis, his teammates on the Philadelphia Flyers started wearing special “Oskar Strong” T-shirts under their uniforms, in solidarity with Lindblom. Fans and players on other teams began sporting the shirts, too. Made by Biscuit Tees, the shirts are available for consumers to purchase. All proceeds benefit the “Hockey Fights Cancer” initiative. 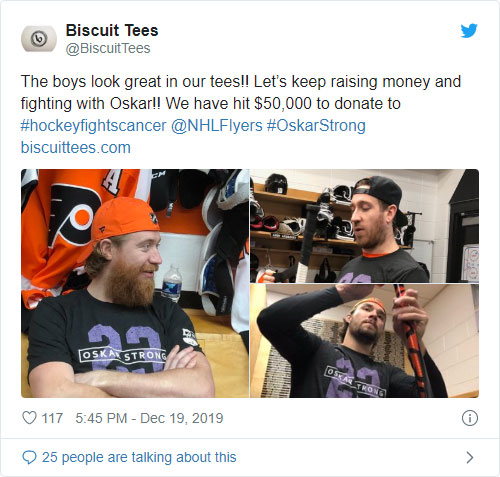 Meanwhile, Flyers Charities also released an “Oskar Strong” shirt. All proceeds were to benefit Ewing’s sarcoma research at the Sarcoma Foundation of America.

While heart-wrenching, the McCord and Lindblom stories serve as examples of how branded merchandise can be a tangible force for good when trials strike. That impact amounts to much more than trinkets and trash. 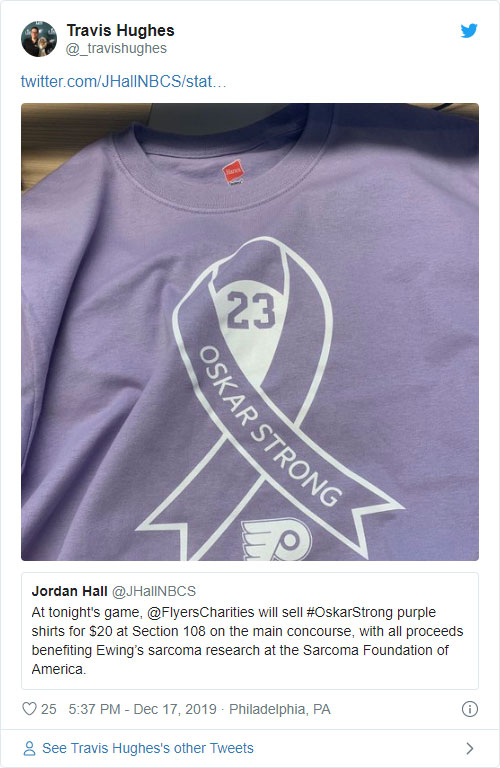